It could be one of the following causes:

Solution: Execute the following command in order to check the logs for the error causing the crash:

Solution 2: Execute the following steps in order to change the time of actuation of the watchdog:

Step 2. Modify the parameter WatchdogSec with the desired time of actuation of the watchdog.

Step 3. Execute the following commands to reload the systemd deamon and restart the Node-RED service:

For further information about the watchdog, please check here.

Cause 3: There is some process that monopolizes the CPU.

Solution 3: Review the processes that are running using the top command in the shell.

2) Sometimes Node-RED restarts for no reason.¶

Cause: Node-Red stucked due to incorrect configuration or programming in the Node-RED flow.

Solution: Execute the following command in order to know what is actually causing this: 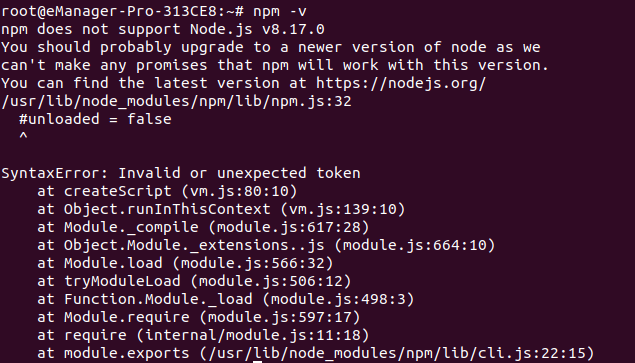 Cause: New version of npm have updated, and it is no longer supported on the node.js version of the system.

Cause: Some Node-RED packages require the native compiler in the eManager, such as node-red-node-sqlite.

Finally, restart the node-red service and try again to install the node in Node-RED:

5) TypeError accessing to a hardware module¶

Cause: More than one hardware module request message ocurred at a time, and therefore a collision has occurred.

Collisions can occur when at the same time, on the one hand, a request is made to a hardware module, while another module generates an event from an input.

Solution: If possible, decrease the frequency of polling requests, to minimize collisions.

When you try to update the version of one of the Node-RED nodes in the list below and the version is higher than the one supported, the error message shown in the capture is displayed.

Solution: Reinstall the previous version. To do so you need to execute the following commands:

In this example, to reinstall the previous version <node_red_node_name> is node-red-node-dashboard and the <version> is 2.30.0.

Cause: There are some new version the Node-RED community has published for some nodes that are not compatible with the Node-RED version the eManager incorporates. When you try to install some package with a higher version that the one supported, this error occurs.

Solution: Manually, install the packet with the last version compatible with the Node-RED version the eManager incorporates. To do so you can follow the instructions detailed here.

If you want to know the last versions compatible with Node-RED 0.20.8, please check here.

Cause: If you try to install a specific package and the Internet connection is broken during this process, it could happen that some parts of the package are already installed while others are not. In this case, an error similar to the one shown in the image may appear.

Solution: You must clean the files cache using:

And reinstall the package using:

In this example <package_name> is python-pkgutil.